On the banks of the River Nile, about 2 kilometres from the source of the Nile as it flows out of Lake Victoria, in Uganda, is Mto Moyoni.  It is a retreat centre literally on the banks of the river. The beautiful gardens stretch down from the collection of bandas, that make up the accommodation, right to the waters edge.  It is a haven of peace. 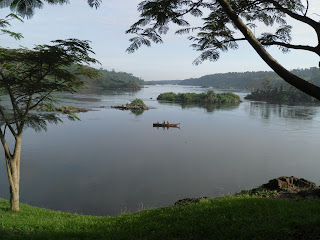 To get here involves a rather challenging journey from Entebbe International Airport through the sprawling jumble of modern Kampala which has no understanding of town planning or roads suitable for modern Africa. On a good day it takes about three hours. The senses are assaulted in every way on the journey. Noise, traffic, pollution, crowds of people, animals tethered by the road, women carrying every conceivable bundle on their heads, bicycles loaded with produce and firewood. Bodas (motorcycles taxis) carry whole families, trucks billowing out filthy exhaust,  pot holes that you could lose a bus in, police road checks, convoys of official vehicles roaring down the middle of the road at high speed amid sirens and blue flashing lights, this is modern day Uganda.
On arriving in Jinja we turn off the main road into a side road, then on to an unpaved road into fields and scattered houses. Suddenly we are there at the gates of Mto Moyoni. We pass through a bougainvillea covered arch into the tranquility of the retreat centre.  The centre has been built and is operated by our friends Ingrid and Winette, two dutch women who have been here for many years.
Mto Moyoni means "river in the heart" in Swahili and expresses the vision these ladies have. They run courses and seminars called Transformation weeks and Fatherheart Encounters. They also make the centre available for people needing rest and relaxation. We are here to lead a Fatherheart Ministries School with 40 people from all over Uganda. 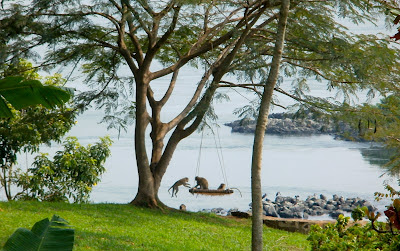 This is arguably one of the most beautiful places where we have led schools. It is set spectacularly  amongst God’s other book.  In the ten days we have been here I have seen over forty different species of birds from the gloriously dramatic  fish eagle to the eccentrically named red-cheeked cordon blue, which is a tiny, wren sized, blue bird with a red spot on the side of its head.  Troops of red tailed monkeys regularly swing through the garden on their way up river to raid a local village’s gardens. Otters can be seen swimming along the banks of the river and there are even occasional sightings of seriously venomous cobras. 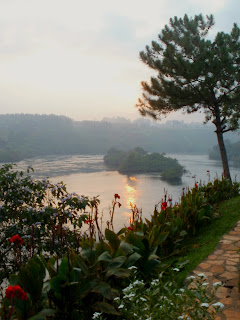 The people that come here have stories of lives of hardship and trauma that are typical for so many in this blighted land once called by the Pearl of Africa by Winston Churchill. It is a land torn by years of dictatorship, of rebels kidnapping children and turning them into child soldiers, of every family being touched by HIV and Aids. 60% of the population are literally orphans and 75% are under 25 years of age.
During the week many encountered the Father’s love. One girl, raped only a few weeks ago and now pregnant came ready to kill herself. She left with new hope and trusting her Father to care for her and the precious life she carries within her. Another young man, who announced himself at the beginning of the week as an orphan, left knowing he was a son of his heavenly Father. On the last day he celebrated his 23rd birthday. The first time he had ever celebrated it.
The river of God’s love is flowing in Africa. The transformations weeks continue and the Father encounters. In January there is a month long youth school which will include ex child soldiers and street kids.   For more information about Mto Moyoni, here is the link to their website.  New Website
Posted by Trevor and Linda Galpin at 15:26 No comments:

Floating on a glassy sea.

The Waddenzee wasn't exactly on my radar to be honest.  Actually I had never heard of it before January this year.  Now I am a seasoned seafarer on that particular sea, too many seas but never mind.


It all began last January when Linda and I were walking along the lake shore of Lake Taupo one glorious summers afternoon.  As we walked and talked a two masted sailing ship full of tourist glided past.  I gazed at it and said to Linda, "I'd love to go on a proper sailing ship one day."  We joked about putting it on our bucket list - that list of things you would like to do before you die.  The problem with a bucket list is that as you tick them off as having done them you have to think of more things to do.  I am a great believer in living life to the full and I think we stop growing when we stop having adventures and challenges.


Anyway, about two weeks later we got an email from some dear friends in The Netherlands asking us if we would like to join them on a Fatherheart Sailing Holiday on the afore mention but hitherto unknown to me, Waddenzee. What is more it would be on a three masted clipper called the Noorderlicht. This means Northern Lights in Dutch which incidentally also figures on my bucket list.


Seven months later there we were standing on the quay at Harligen in the Netherlands about to step into another adventure.  The ship was about 50 metres long and slept 40 people, all like us, land lubbers who couldn't tell their port from their starboard, stern from the bows or belaying pins from their hair pins.  It was a very jolly group.  The weather turned out to be stunning. Just enough wind to fill the sails and not enough to turn us green. 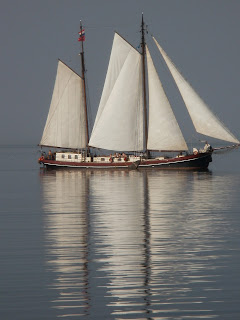 For five days we sailed between the islands and around the sand banks. We stopped at beautiful little ports, sang sea shanties while we hoisted the sails, quoted lines on a very calm day from the Ancient Mariner about painted ships on a painted sea and had a fabulous time.  The pace of life slowed, the phones didn't ring, there was no internet on the ship.  Bliss.


Added bliss was contributed by Koos and Georgine's wonderful food, prepared each day with loving care and visual flare. Each meal was a feast for the senses, something Georgine believes is very important as she brings the love of God the Father into her everyday life.


Each day we shared from God's two books, the Bible and creation.  On two occasions I preached among the sand dunes on Vlieland and another time in a grassy field surrounded by trees.  Many of us encountered the Father's love in a new and fresh way.


As the week ended and we moored alongside the quay again, I wandered about my bucket list. I decided that there was something on the list that would be the biggest adventure of all. It will mean I have reached the end of my list. It is to go home to my Father, that step from these shadowlands, as CS Lewis calls them, this temporary transient life, to the true and the real which is life in eternity with Him. Tolkien, the close colleague and friend of Lewis also saw the reality of this in Lord of the Rings. There is the poignant time of the passing of the Elves, taking ship, along with Bilbo at the Grey Havens to the Islands across the sea.  For all of us there is poignancy in the passing from this existence in our fallen broken and shadowy world to the better, richer, brighter reality that is to come. The wonderful thing for us who know God is that we have already begun that journey.


For me this is the greatest adventure of all.

Posted by Trevor and Linda Galpin at 16:11 No comments: